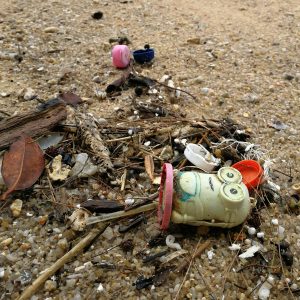 Some of you might not have heard of it; others might be more familiar with it. So let’s dig in.

[01:21] A gyre is a large system of circulation ocean currents that are formed by global wind patterns as well as forces that are created by the rotation of the earth.

[01:50] Boyan Slat decided that he is going to do something to clean up the oceans and have since then launched The Ocean Clean Up.

[02:00] In 2015 the first mega exhibition was launched by crossing the Patch with 30 boats simultaneously, and they collect 1.2 million plastic samples, in small nets and two giant trolls that were towed behind the boats.

[02:49] that ran the first aerial survey of a garbage patch.

[03:01] The debris measured 1.6 million square kilometres. That is three times the size of France.

[03:08] The patch contains 1.8 trillion pieces of plastic. That equals 250 pieces for every human in the world.

[03:29] 92% of this mass is made of larger objects, that will be fragmented into smaller dangerous micro plastics over the next few decades if not removed.

[03:42] Slat and his team created an artificial coastline system in the ocean where they will concentrate the plastic and remove it.

[04:13] The system will be taking advantage of wind, waves and currents.

[05:13] A support vessel often comes and removes the plastic, similar to what a garbage truck would do.

[05:19] The debris is then taken to land where it is recycled and turned into beautiful products.

[05:49] It is expected that the fleet would be able to clean up 50% of The Great Pacific Garbage Patch every five years.

[06:24] Reduce the amount of single-use plastic items you use by switching to reusable options.

“The debris measured 1.6 million square kilometres. That is three times the size of France.”

To think that somewhere in our beautiful ocean is a large plastic mass three times the size of France. I am still trying to wrap my head around it. Plastic has been around for the past decades and was created to make our lives easier. However, when looking at the Great Pacific Garbage Patch and the effect that these plastics have on the environment, it really makes me wonder. If we all evaluate our daily life and pick one item that we would like to reduce it will make a difference.

About the author, Mariska

Hi and welcome! My name is Mariska. I am originally from South Africa, but now call the world my home. I am an artist, designer, environmentalist, podcast host and speaker.

I started the Mama Earth Talk podcast in 2018 to share some of the things that I learned about just how easy it can be to reduce your impact on the environment. This then quickly grew into a forum that showcases the amazing things that many people are doing to make the planet better, and further into a source of hope and inspiration for many. A few of the amazing guests include Zero Waste Queen, Bea Johnson, Claude Silver, Kathryn Kellogg and zero waste chef Max La Manna.

If you do not already I urge you to follow me and my journey on social media (@designbymariska), and to refuse, reduce, reuse, recycle and rot your own waste using the handy tips I post!